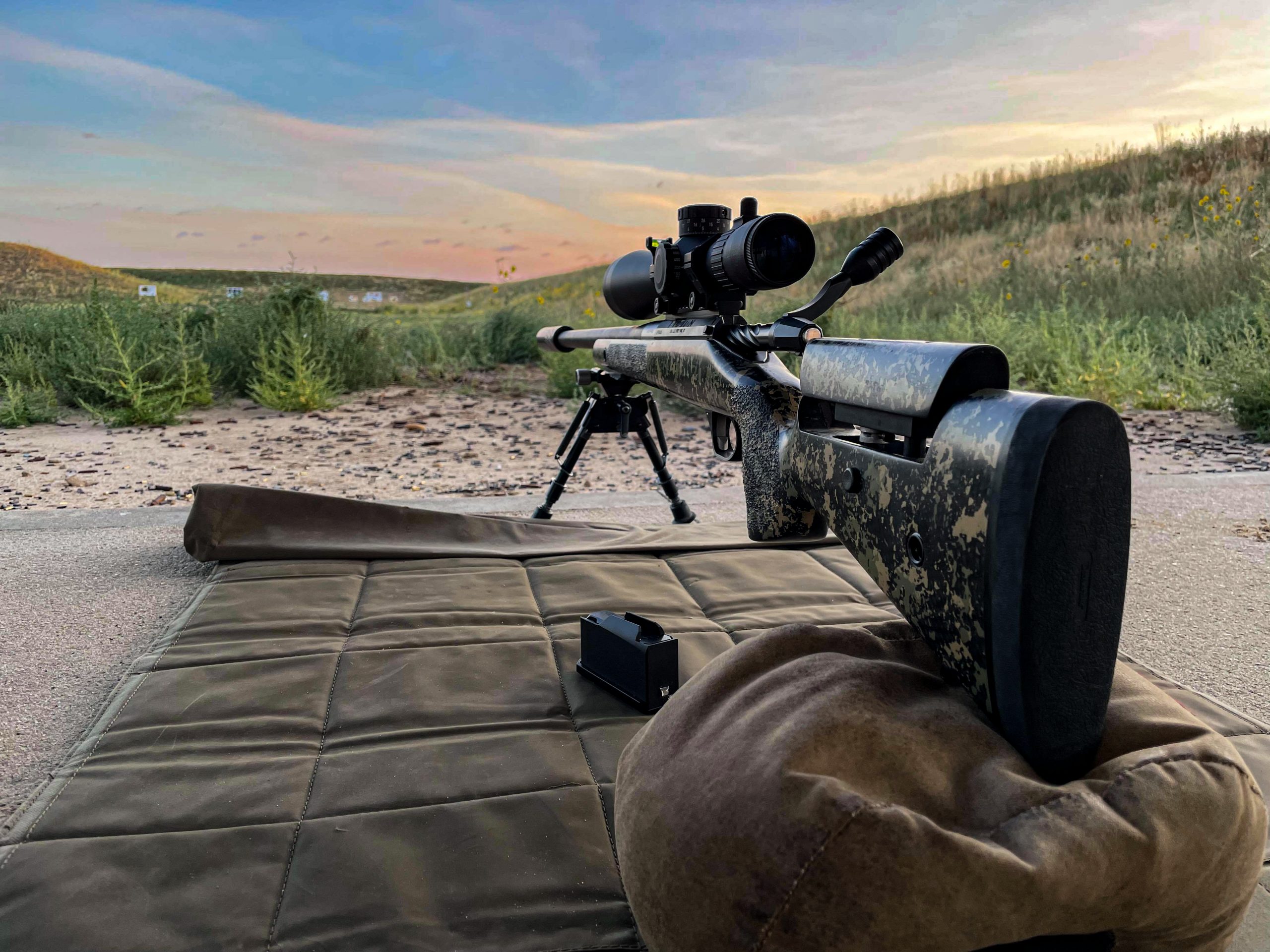 Do you have a new rifle and you’re looking to get up and running quickly? Do you have limited supply of reloading components to get it dialed in? Well, this is the article for you. We’re throwing wrench in the normal load development article and showing folks how to do it as quickly and efficiently as possible.

There’s plenty of information about laboriously doing load development. We’re not here to regurgitate OCW and bullet seating testing. This is a method for getting up and running fast, and we think you’ll be surprised how quickly you can get a load without endless load development at the range.

We’re using the Hawkins Precision Hunter DBM in this rifle as it allows us to use flush 4 round Hawkins Hunter magazines for hunting, while also being able to use 10 round AICS pattern magazines for competition.

One of the biggest reasons folks move to custom rifles is for more consistent accuracy and reliability. However, many times shooters get hung up in reloading room and not at the range. We shoot a lot in PRS/NRL competitions where winner isn’t crowned by shooting the smallest groups, but by how they can adapt and adjust to changing conditions.

A having a hammer for a rifle doesn’t hurt the winner either. Let’s not undervalue the need for a very accurate rifle. This is how we get there, practically.

Breaking in that Barrel

There’s a lot of opinions on how to break in a barrel, so much so that we’re not even going to cover that here. Some of it is voodoo and dogma, some of it is true. Follow your barrel makers recommendations. Generally, we give it a good clean right off the bat and a gentle first day at the range, shooting about 20-30 rounds. Get home, give it a clean and go. Follow your preferred cleaning regime from there.

The biggest thing to do is make sure your barrel has at least 100 to even 200 rounds on it before you start charge weight load development. Barrels will speed up after the first 100 or so rounds, making your charge weight testing a moving target during that time.

However, with reloading components hard to find this should not be wasted time behind the rifle. This is when we start bullet seating depth testing. This will also give you a general idea on velocity and accuracy potential for your rifle. Tuning seating depth first often makes charge weight testing a breeze too.

The prevailing thought on bullet seating depth is to seat the bullet .020” off the lands. Or you need to be touching the lands, then chase the lands while the lands erode to maintain that distance. However, if you’re looking for a more consistent rifle over the life of the barrel, many folks have found that jumping bullets farther is producing “set it and forget it” levels of consistency in their rifles.

This may not be short range benchrest accuracy, but we want something that will be more consistent in a wide band of seating depth and environmental conditions. Hunting and NRL Hunter competitions generally don’t happen in ideal conditions, and we want a load that performs and is consistent everywhere.

This is where we’ll start, bullet seating depth testing the 143 ELD-X bullet in Hornady brass, with a CCI-200 large rifle primer and Hodgdon H4350 powder. All proven components. We’re not trying to write rewrite the book on reloading 6.5 Creedmoor.

To start off bullet seating depth testing we’re going to use the A-Team Precision method of finding the lands in the barrel. (Video Here) The Hornady OAL gauge is a handy tool too if you have a modified case. Both methods work well. See the link to A-Team Precision Facebook page for a video on Brian Allen’s method.

With that method we measured a CBTO length to the lands of 2.9800” with a SAAMI spec reamer. From there we are going to test the rifle from .020” off the lands to .070” off the lands. The starting load will be 41.5 grains of H4350 at the suggestion of Dan at CS Tactical, who has won several large 2-day PRS and NRL matches with a 6.5 creedmoor.

You’ll also note some very interesting research from the Precision Rifle blog of bullet jump and accuracy HERE. Specifically for the 147 ELD-M, which is close cousin to the ELD-X. Hence why we’re testing to around the .060” mark as it’s shown to be a sweet spot with many Hornady ELD series bullets and the A-Tip line of bullets.

The big things were looking for here are accuracy and consistent point of impact as we seat further into the case. Some things we’re not worried about, a minor loss of case capacity. 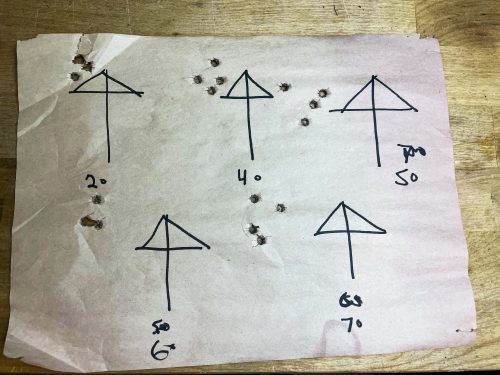 A pressured up load is no one’s friend in regards to consistency or load stability in hot or wet weather. It also produces sharper recoil. We’d rather see that bullet impact, or better yet, flying in the air if possible. Taking a small hit on velocity is worth it if you can spot hits and misses.

We tested at 200 yards on paper in cool, calm conditions very early in the morning. The results were pretty consistent. The .020” shot well, but as we got into .040 and .050 off the lands, the POI moved and the groups opened up. Then almost like magic at .060 groups got tight again, and the point of impact evened out.

The loads were logging 2,730 FPS on the MagnetoSpeed, which was plenty for the game we’d be taking with this rifle (Pronghorn Antelope & Mule Deer) and easily meets the NRL Hunter power factor requirements. Looking at how the rifle was grouping at .060” off at that powder charge weight, there honestly wasn’t much else to look over. At this point we had 80 rounds down the barrel, the rifle was shooting lights out.

Our tester was also two weeks away from a hunt at Rocky Mountain Ranches for Antelope. Instead of pump more rounds down range, it was time to test the load at 600 yards and see how it was doing at distance. 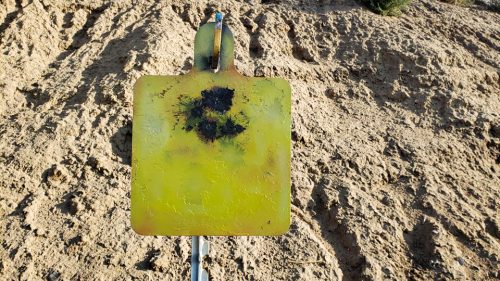 As mentioned, 41.5 grains of H4350 was producing 2,730 the last time we shot the Creedmoor. The next day at the range we took 50 rounds of that charge weight with the bullets seated .060” off the lands. The results were an immediate four shots on the money at 555 yards.

You’ll note in the photo the shots were a tad high of center on the plate, and this is a good example of why we’re waiting to test charge weights. Truing up velocity on the target, with a good zero, had us at 2,760 FPS. Sped up just enough to be a 1/10 of a Mil high on that target. However, that grouping tells us one thing, the load work-up is already about done.

At this point we had give to take 50 rounds of bullet seating depth testing and 30 rounds shooting at distance. We may also be at the end of the barrel speeding up, but the only way to tell if that has happened is to shoot more.

If the barrel is finished speeding up, the load will likely stay. If it climbs again, we’ll back it down. Ideally testing from 40.5 up to pressure in .2 grain increments just to see where it was at. Maybe 25 rounds total, if it even comes to it. This is the 2nd time the barrel has sped up, so our guess is the load is here to stay.

If you’ve made it this far, you may be thinking that your load development work never works out that perfectly. Or that when someone gives you a charge weight it never works! However, with some solid research and good advise this can happen. Even looking over the loads for 6.5 Creedmoor from an older Precision Rifle blog seems like we’re right in the wheelhouse. We’re just simply using the power of the Internet for good, for once.

Hopefully that helps your reloading journey if you’re in a tight spot on time or components. If you’re shooting a new caliber with less information and want to find the top, bottom, and flat spots in the caliber node, the Scott Satterlee 10 shot method is a good one.

Another good option is heading to a place like the Sniper’s Hide reloading depot. If you take some time looking over preferred reloads, you’ll likely find some correlation in what working. You’ll likely spot the crazy stuff in there too. Average it out, find the clear winner between the lines.

We just got lucky we have an expert in Dan Bertocchini from CS Tactical, and a three-part article on a bullet we’re basically shooting. If you have a buddy that is well versed in a caliber, not a bad idea to take their advice and use it to your advantage.  There’s some bad information out there, but there’s plenty of good. Spend some time on the computer one night, develop a plan and get after it!