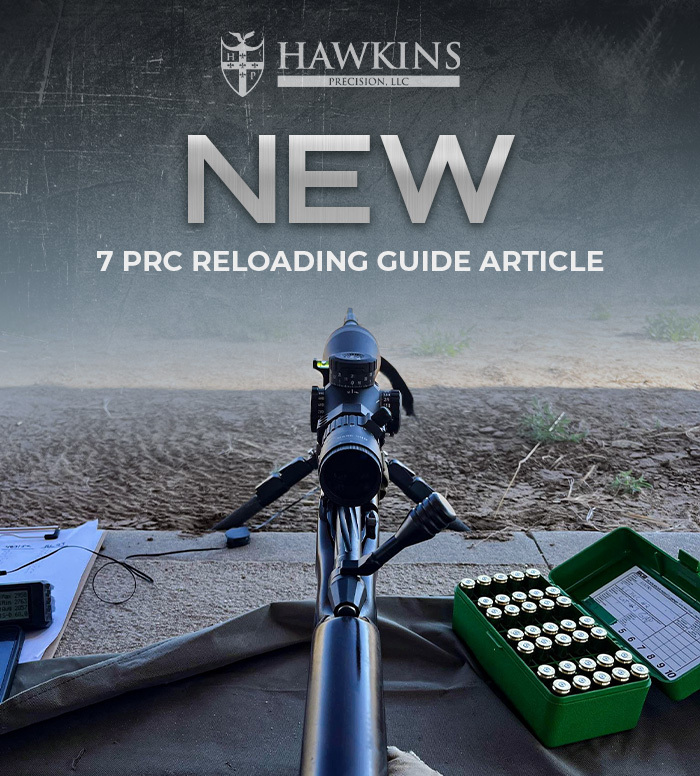 The 7 PRC is here. Hornady’s new 7mm round has gotten a lot of attention since the SAAMI specs were released in the Summer of 2022. There’s been a lot of discussion (Why not 28 Nolser?! Won’t be as good as a 7 SAUM!) but what about the facts? Here we’ll show you some real data from our own 7 PRC reloading and load development.

The team at Hawkins Precision was lucky enough to be a part of the launch testing group for this cartridge, which has given us a lot of time with it and the ability test the cartridge’s accuracy and velocity potential. We have shot this cartridge at the Nightforce ELR match and we’re using factory 175 grain ELD-X 7 PRC ammo for two elk hunts in Colorado this year. Here’s what we found out.

The 7 PRC rifle used in the handloading tests features a 1:8 twist, 24” Krieger barrel chambered by TS Customs out of Miller, SD. It is chambered on a Long Action Impact Precision action, sitting in a Foundation Genesis (MG2) stock with long action Hawkins Hunter Bottom Metal with a Magnum Hunter Flush magazine and a 300 NM base pad to give us one extra round. Trigger is a Bix N’ Andy Tac Sport Pro, and a Leupold MK5 HD 5-25 scope in a set of 1.0” tall Heavy Tactical Scope rings. Lastly we tamed recoil with an ACE Precision LLC 30 Cal brake.

For Elk Hunting and factory ammo we are using the same Impact Precision action & Leupold scope, but with a 1:8 twist, 22” Benchmark carbon fiber barrel, Hawkins Tank ST brake, in a TS Customs KS1 stock. We ran some 175 grain ELD-X factory Precision Hunter ammo in this set-up, and it was shooting well at 3,040 FPS on a brand new barrel.

Reloads – Where to Start

As you can guess reloading a completely new caliber with no factory published load data can be tough, but having spent a lot of time testing and shooting 6.5 PRC I knew I could get in the ball park on safe charge weights to test. I also had 6 powders on hand that would be suitable for the 7 PRC.

For this test we are using the Scott Satterlee 10 shot method of load development. This is a great tool to get an idea of your rifle’s accuracy and velocity potential, allowing you to drill down from there. Also, since this 7 PRC was shot at Nightforce ELR, the barrel is well broken in.

The powders we used in this test are: H1000, Retumbo, Vihtavuori 565, H4831SC, IMR 8133, and Reloader 23. Would have also loved to get some Reloader 26 in this test, however finding some to evaluate proved difficult at best.

We are using Hornady Brass, with Federal 215 primers. To get a good base line for both heavy and light bullet weights, we tested with the 180 grain Hornady ELD-M. 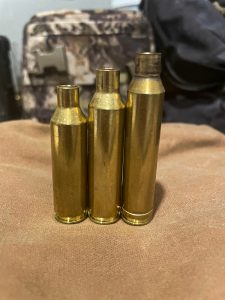 Please note, this reloading data is only meant to be used as a starting point. Always be cautious when reloading. Use this data at your own risk. All data was collected with a Magnetospeed chronograph. All loads were measured on a FX120i scale on a V3 AutoThrow with an Ingenuity Precision Trickler system.

Alright, let’s get to the data and let’s start with one of the best of the test. No surprises here, H1000 was a good one. Accuracy was excellent and I even had to test it twice as the first time I was well below max charge on this one. Good part, is we have lots of data points to share for H1000 in the 7 PRC.

You’ll note there’s several flat spots in this data and even at 70 grains I was not getting any traditional pressure signs. I would expect a few more grains I’d start to see it though. Once the Hornady data comes out we’ll see how close I was to max, or if these loads are over book max.

Retumbo is what we used in the 7 PRC for the Nightforce ELR match, and it shot great under the 190 grain Hornady A-Tip bullet. Our load for that match was 68 grains at 2,930 FPS with .120” jump. Yes, you read that right. A-Tips are more than happy to jump. Do not be afraid to jump bullets.

Anyone that has shot Retumbo know it’s a great powder, and it is well suited in the 7 PRC for the heavy 7mm bullets. We also shot a few more loads in for this test as we did not find pressure in the first test. How’d it do for the 180 grain ELD-M? Here’s the data. 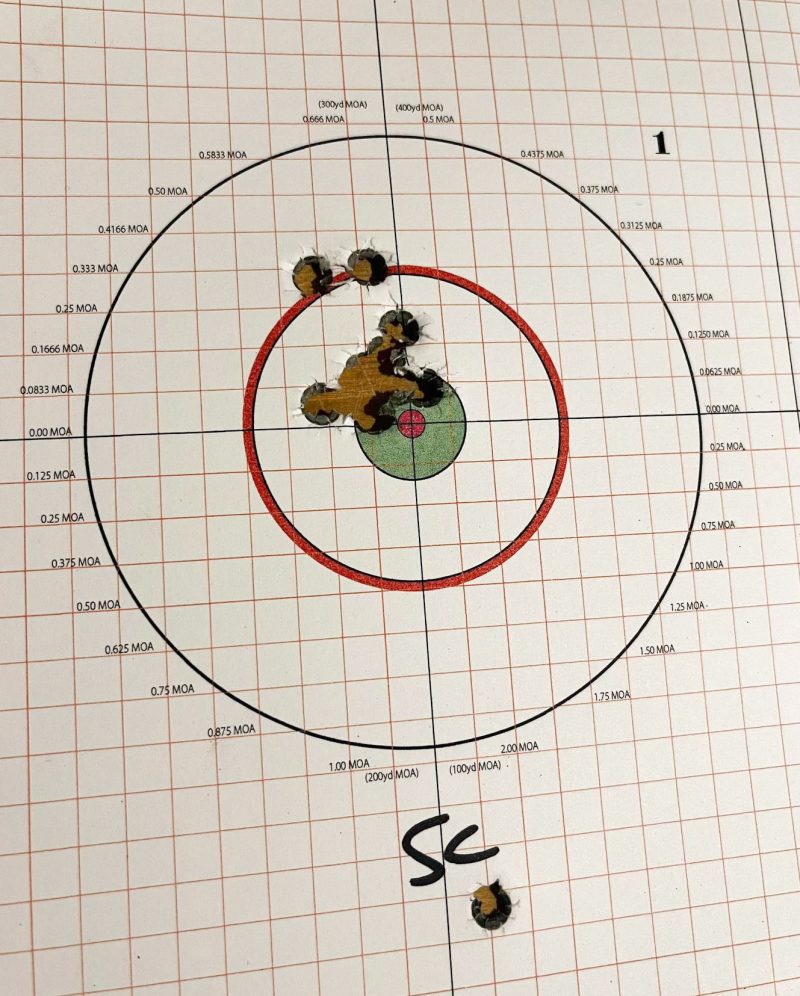 Can you ever go wrong with H4831SC? Doesn’t seem like it. Just like in my 6.5 PRC testing, the 7 PRC liked our reloads with short cut version of H4831. Accuracy was great, but you will sacrifice velocity with heavy bullets using it. I would suspect with copper solids and light 7mm projectiles it would be an excellent choice.

Vihtavuori 565 is right in there with Retumbo and H1000, so how did it stack up? Velocity was a touch higher than Retumbo and right in line H1000. We found better accuracy with both Hodgdon Extreme powders though. However, if you have some of this powder hanging out in your cabinet and a shiny new 7 PRC, I’m sure most folks to make it hammer down.

IMR recently announced the Enduron line of powders would be discontinued which is a shame. In particular, IMR 7977 is a great H1000 alternative. IMR 8133 is supposed to be IMR counterpart of Retumbo, but every time I’ve used it, it’s been a much slower burning powder. Never really getting the velocities I was looking for on any handloads I’ve tired with it.  However, it is very popular with King of 2 Mile shooters for it’s slow burn rate for the very large calibers they use in that sport. 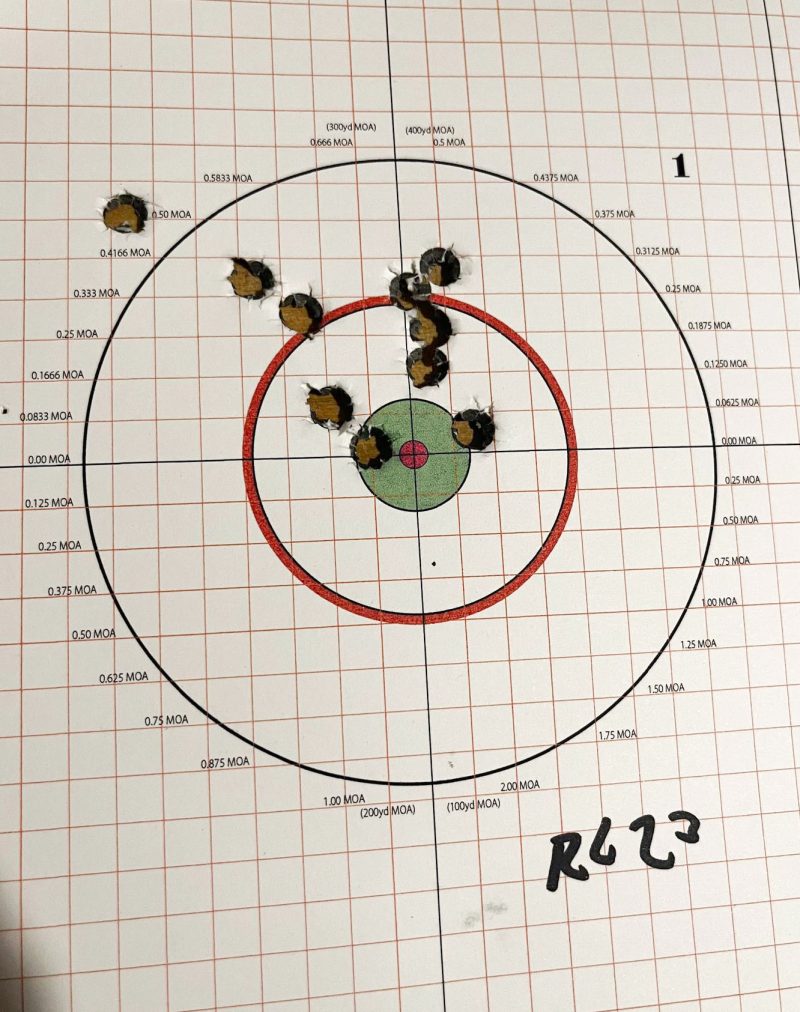 Reloader 23 – Bringing up the Rear

Not sure why ole’ RL23 and I haven’t ever got along. The 1-pounder stays in the reloading room for just this sort of test. I was hoping it would show H4831SC levels of accuracy, but it did not. However, the one interesting news of note is at the top of the charge weights I felt I was getting close to pressure on the 7 PRC.

None of the other powders I felt that sharp crack on the shoulder or that slightly harder bolt lift. While I had no ejector marks and no overly stiff bolt, I felt I was certainly getting close with RL23 near 3,100 FPS.

I have to admit, being able to shoot a brand-new caliber before the release was stuff of dreams. For anyone that has jumped on a forum and was a naysayer, I believe you’d very much enjoy loading and shooting the 7 PRC. It is light enough recoiling for a hunting rifle, accurate, and well thought out. It fits into the Hornady PRC lineup perfectly and is an easy 2,900 to 3,000 FPS cartridge with 180 grain bullets.

After testing I would say my favorite powers are: H1000, H4831SC, and Retumbo. N565 would be right behind with RL23 and IMR 8133 likely not worth the effort unless that’s all you have. Which can certainly happen in these times.

I wish I had more time to really drill down with this test and give folks a definitive load, however that wasn’t in the cards and I really wanted to give everyone a god starting point. If it were me I’d be looking hard at H1000 and H4831SC in those 3,000 FPS and 2,950 FPS flat spots.

That said, the 7 PRC is a great cartridge. It was right in the Top 10/15 mix at Nightforce ELR for much of the weekend and I’m sure it will take lots of game in the coming years. I hope this article was helpful in your 7 PRC reloading journey and it nets you some ¼ MOA all day groups, if you do your part.

Nick Depperschmidt is the Sales & Marketing director for Hawkins Precision, a precision rifle components manufacturer in Colorado Springs, Co. He is an avid hunter and competitor in PRS and NRL Hunter style matches. If you’d like to reach out, email Nick at nick@hawkinsprecision.com.